Hemyock Castle is a privately owned scheduled Ancient Monument & residential site, normally only opened to the public during special open days on Bank Holiday Mondays (2 to 5 pm) between Easter and September. On our open days, visitors can view the substantial remains of Hemyock Castle's towers, walls, moat, grounds; and visit its display areas

The remains of a moated, rare late 14th century castle surround a much older manor house. During the 17th century English Civil War, the castle was garrisoned for Parliament. The Royalists attacked twice, eventually besieging and capturing Hemyock Castle. Afterwards, the castle was slighted (destroyed). Subsequently the site evolved to become a farm, and later a private home. Former outbuildings have also been converted into homes 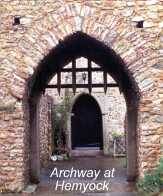 People Power – The March to Democracy

"Democracy: The worst form of government... except for all the others."
Quip by Sir Winston Churchill, November 1947.

For the moment, Britain's fragile democracy has survived its latest challenge from people with power, influence, and money. More needs to be done to accommodate the influence of mass media, social media, worldwide communications, and large movements of populations. Other Western Democracies are also struggling to adapt to and to overcome their own democratic crises. This material from our special exhibition for Hemyock Castle's Heritage Open Days 2019 is about Britain's long, slow, continuing progress towards democracy; particularly the contribution of people associated with Hemyock Castle.

The largest seaborne invasion in human history, took place on 6th June 1944. Operation Overlord, the invasion of Normandy, required incredible planning & preparation as well as the very obvious valour. Our "Hemyock Memories of World War Two 1939 – 45" books include eyewitness stories about D-Day 1944 and its aftermath.

Centenary of the 1918 Armistice Ending the Great War

Fighting in the First World War, the Great War, stopped after the Armistice, at the 11th hour of the 11th day of the 11th month of 1918. This webpage honours all those who fought and died in "the war to end all wars" It links to our YouTube slideshow of original photos: Faces from 1914

Deep Historic Links with Europe, Explored via our Pottery Sherds

Some people fear that UK is about to break its links with continental Europe and cut itself off permanently. Using pottery sherds and objects discovered at Hemyock Castle, these webpages demonstrate that the people of UK – especially of England's West Country – have always had close links with the peoples of continental Europe... official and unofficial... through ups and downs... through good and bad times.

These new webpages and the special exhibition at our Heritage Open Day 2018, were part of the European Year of Cultural Heritage 2018. 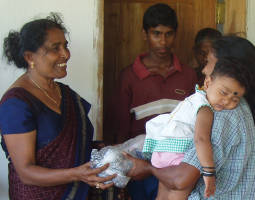 In 1918, many women in Britain aged over 30 (re)gained the right to vote in elections. Ten years later in 1928, this was extended to all women (and men) aged over 21. In fact until the 1832 "Great Reform Act" abolished it, some wealthier women such as Mrs. Elizabeth Posthuma Simcoe could previously have had the right to vote: As well as banning many unsatisfactory electoral practices, the 1832 reform act had also restricted voting in future to only men.

Many visitors to Hemyock Castle met "Prem," who stayed at the Castle while studying at SCAT and Bridgwater College; working part-time at Musgrove Park NHS Hospital in Taunton.

Hambantota, her coastal region of southern Sri Lanka, was badly affected by the 2004 Asian Tsunami. Many thousands of people were killed, fishing boats were smashed, houses and businesses wrecked, and fertile farming land was inundated with salty sea water.

Prem survived and moved to higher ground, looking after her family and some tourists. Prem then worked hard as a volunteer, using friends' generous donations very effectively to help the survivors to help themselves: Read more about Prem's Village Fund for Tsunami Relief. 100% of the donations was used to help the survivors: Nothing was deducted for costs or expenses. Video: Sri Lankan Fishermen - After the Tsunami

To mark the 70th anniversary of the end of WWII; Our 1995 book "Hemyock's Memories of War," was extensively re-organised, re-edited & republished on Kindle; sold in aid of Hemyock's Blackdown Support Group charity. This book contains first-hand accounts of life during World War Two 1939–1945, collected in 1995 from over 75 Hemyock residents as part of the 50th anniversary. Over 130 of the photographs have been uploaded to YouTube, as a series of four HD slide shows.

During 2007, there were many commemorations of Britain's 1807 law which outlawed the trans-Atlantic slave trade. However, Canada's vital role as a safe haven for escaped slaves is now less well known: Read more about Canada's 1793 abolition of slavery & the secret "Underground Railroad" which save so many lives.

Important: We Do Not Send Spam!

If you receive any "spam" emails which purport to originate from us, please delete them and accept our assurances that they are not sent by us. Unfortunately it is very easy to falsify an email address. We do not send "spam" emails.