Centenary of the 1918 Armistice Ending the Great War

Fighting in the First World War, the Great War, stopped after the Armistice, at the 11th hour of the 11th day of the 11th month of 1918. This webpage honours all those who fought and died in "the war to end all wars." 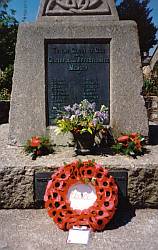 This YouTube slideshow "Faces from 1914" contains some of my grandfather's original photos. My Grandfather's Taunton Battery of the Somerset Royal Horse Artillery was initially kept back to defend the UK. In 1916, it was sent to support the ANZACs in Egypt & Palestine. Other troops in his unit were dismounted and sent to serve on the Western Front.

Many men from this area joined-up together, fought together… and died together. Some joined-up despite having the chance to remain behind in reserved occupations such as farming; some exaggerated their ages, in order to meet the minimum age requirements. A whole generation of young men was decimated, particularly the young front-line officers and NCOs who "led from the front." Afterwards, Britain and other countries sorely missed this generation of able young men. Also, many women could find no husband so never married, so many women instead went into academe, teaching and successful careers. My great grandfather was so devastated by the loss of all four sons, he subsequently lost his farm.

The 1918 Armistice of Compiègne

Fighting in the First World War ended (by Paris time) at the 11th hour of the 11th day of the 11th month of 1918, after Germany signed the Armistice of Compiègne. Previous armistices had recently eliminated Bulgaria, Austria-Hungary, and the Ottoman Empire from the war. The Compiègne Armistice was signed in the personal railway carriage of Marshal Ferdinand Foch, Allied Supreme Commander, located near the village of Rethondes in the Compiègne Forest, Picardy, France, about 60km north of Paris.

The First World War was finally ended by the Treaty of Versailles, signed on 28 June 1919, taking effect on 10 January 1920. Old empires were destroyed; borders changed; new countries formed. But new tensions were created which led to the Second World War and many other conflicts; some of which still continue.

The 1940 Armistice of French Surrender at Compiègne

On 22 June 1940, Adolf Hitler, Hermann Göring, Wilhelm Keitel, Joachim von Ribbentrop and others swept into that same railway carriage in Compiègne, to demand and receive the surrender armistice from France. During the Occupation of France, the railway carriage was taken to Berlin, where it was exhibited in the Lustgarten. German SS guards burnt it in early 1945, at Crawinkel in Thuringia, Germany.

Background to World War One

The First World War is often called "The Great War" – "the war to end all wars." However, in Germany, "The Great War" had often meant the Thirty-Years War (1618 to 1648) which had devastated large areas of Europe.

By 1914, countries awaited only the spark to trigger open conflict. International tensions had been rising for many years due to many causes, including Germany's desire to increase its overseas empire, taking-over territories from other countries' empires; tensions with and within Austria-Hungary; and the steady crumbling of the Ottoman Empire. There were also deep grievances following the settlements to end previous conflicts, especially those between Germany and France.

The European powers had divided into two coalitions: The Triple Entente, consisting of France, Tsarist Russia and Britain; and the Triple Alliance of Germany, Austria-Hungary and Italy. When war did break out, initially Italy stayed neutral. As the war widened, Italy, Japan and eventually the United States joined the Triple Entente, to form the Allied Powers. The Ottoman Empire and Bulgaria joined Germany and Austria-Hungary to form the opposing Central Powers. Many other countries became involved. Russia left the coalition after the Russian Revolution in October 1917.

Military Alliances of Europe in 1914
from, https://en.wikipedia.org/wiki/File:Map_Europe_alliances_1914-en.svg
by historicair, Bibi & Saint-Pol Click to open map at full resolution

As well as the "Western Front" in Europe, "Eastern Front" mostly with Tsarist Russia, and the worldwide naval battles, there were major campaigns elsewhere. These included parts of Germany's overseas empire, particularly in Africa and China, as well as in the Ottoman Empire and Romania. Campaigns against the Ottoman Empire included landings on the Gallipoli peninsula in the Dardanelles; as well as Mesopotamia, Sinai and Palestine.

People came from all over the British Empire, fighting bravely on the Western Front and in many of the other campaigns: Their names are amongst the dead in the many Commonwealth Cemeteries around the world. As with British soldiers, the high casualty rate among these young men often decimated their home communities and countries. Some people such as the Chinese Labour Corps were supposed not to take part in actual fighting.

About 70 million people were mobilised, including about 60 million Europeans. Over nine million combatants and seven million civilians were killed. More than twice that many were seriously injured. As well as direct military action, the war also brought diseases and famines.

Between about January 1918 and December 1920, the World was hit by two waves of an H1N1 influenza pandemic: "The Spanish 'Flu." About 500 million people were infected, all over the World. Between 50 and 100 million people died, many of them young and otherwise healthy. This further depleted that generation of young men. (The nickname Spanish 'Flu was largely because the uncensored Spanish media reported the pandemic, whereas censored media in the warring countries initially kept quiet about the pandemic.)

Germany commemorates members of the armed forces and civilians who died in armed conflicts, as well as victims of violent oppression, on Volkstrauertag; its "People's Day of Mourning." Since 1952, this has been observed two Sundays before the first day of Advent; ie. on the Sunday closest to 16th November.