Recent conservation work has uncovered extensive areas of the external rendering believed originally to have covered the outside of the curtain walls and towers. 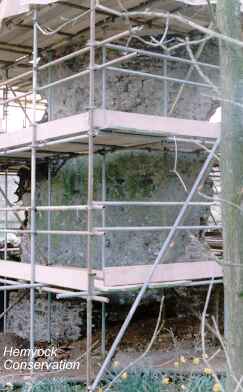 Rendering on the NW Tower

The remains of the NW tower had appeared very precarious and it was covered with ivy vines. Some of these vines were as thick as my wrist. Experts had debated whether the ivy was supporting the tower and its leaves shielding the mortar from the rain; or whether its roots were destroying the masonry. Eventually they decided to remove the ivy. The masonry was then stabilised. 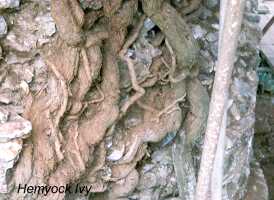 Thick Ivy on NW Tower
(beside a scaffolding pole)

Living thatch - special turf - was fitted to the top of this tower and the other walls to protect them from the weather.

Fitting the Living Thatch to the NW Tower

The NW tower has now been stabilised and conserved. Its masonry proved to be more substantial and better preserved than had been expected. This work also revealed unexpectedly large areas of well preserved medieval rendering on the outside surface of the tower. Originally, the external surfaces of all Hemyock Castle's wall and towers would have been rendered and lime-washed; partly to protect the masonry, partly to make them more slippery and more difficult to climb, partly to make the castle look more formidable. 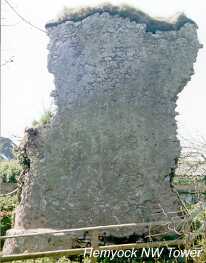 Rendering on the NW Tower

In accordance with the current government policy of not disturbing archaeological sites unless essential, there has been very little investigation of Hemyock Castle. However, even the conservation work, emergency repairs, and the very limited investigations have already disproved several myths which are still often repeated:

1. Towers Did Have Ground-Level Entrances

Archaeological work has proved that at least the four corner towers all did have ground-level entrances. The entrance to the south-west tower still has a slot for the door-post. In accordance with policy, the excavations were later filled-in, to protect the structures.

2. Towers Did Have Upper Floors

The southern gatehouse tower has the type of putlog holes normally used to support an upper floor. It also looks as if there was a chamber above the eastern entrance vault. Insufficient height remains of the other towers to be certain, but equally there is no evidence that these other towers did not also have upper floors.

3. Towers Were Designed for Defence, Not Accommodation

Unlike eg. the slightly later Bodiam Castle, the walls and towers of Hemyock Castle were built around an existing older manor house or court. So there was less need to incorporate accommodation into the walls and towers; meaning that they could be simpler and designed purely for defence.

4. Walls and Towers Did Have Facing Stones

After Hemyock Castle was slighted in the 1660s, following the Civil War, much of its stone was removed and probably sold for use in other buildings. This left the rubble core of some walls and towers exposed, although the gatehouse towers still have facing stones. Also, small pits dug in 2018 during emergency repair work, unearthed quantities of facing stones.

The western part of the castle enclosure was surveyed briefly by English Heritage (now Historic England), in February 1999. The results suggest the likely location of the western curtain wall, and possible western entrance. Their Report 14/1999 can be viewed at Report 14/1999, http://research.historicengland.org.uk

Much further work is needed to understand the site, but this survey has added considerable interesting evidence.

Hemyock Castle is a scheduled ancient monument, there are now very strict rules which govern archaeological work. Most of the other buildings on the site are also listed, so are also covered by strict rules.

Hemyock Castle is privately owned. The manor house is a private family house. The owners pay for the conservation and maintenance. English Heritage has made some welcome contributions towards the high costs of specialist skilled workers and authentic materials.