Recent conservation work on the towers, has unearthed some unexplained features.

At the base of the North-East tower, beneath a 19th Century cobbled floor, archaeologists have found another cobbled floor with a large central hole. Around the walls of the tower there are a series of closely spaced putlog holes. 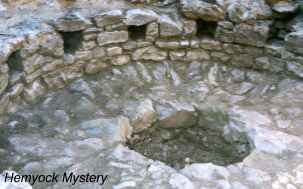 The closely spaced putlog holes around the wall suggest that there was a strong wooden floor to support heavy weights. But why have a wooden floor so close to the cobbled floor?

Further excavation since this photograph, has revealed that the hole is about 1 metre in diameter, with a stone lined rim. Further details will be published when available.

What is This Feature?

Ideas so far have included:

Dunster Castle near Minehead, had a Dovecote Tower. Many rows of nesting boxes were built into the inner wall of the tower and there was a complicated revolving ladder to provide access.

Pigeons were reared for meat and eggs. However, because they ate the crops, only the lord of the manor was allowed to keep them.

Bodiam Castle had a combined dovecote and well tower near its kitchen. Apparently, the water was derived from the moat and used only for washing or brewing into ale – or fighting fires! Presumably it was also used for watering any horses and live stock.

This combined dovecote and well seems a possible explanation for the Hemyock tower. Perhaps it provided a safe means of drawing large quantities of water from the moat and allowed the real well to be kept for more important domestic purposes.