Records show that Sir William was appointed to the important post of "Keeper of the Channel Islands" at an especially sensitive time – in 1373 during the interminable "Hundred Years War" with France which lasted from 1337 to 1453.

These islands located close to the coast of France and in the western approaches to the English Channel had great strategic importance. In the 10th Century they had been granted to the Dukes of Normandy, brought to UK by William the Conqueror.

In return for maintaining the defences of the Channel Islands, Sir William Asthorpe was appointed the virtual ruler and awarded all taxes and revenues.

Interestingly, the Commitment also specifies that, in the event of peace, a farm of 300 marks per year be paid to the King's exchequer. 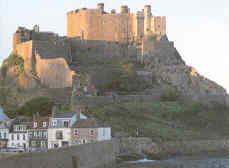 After much valiant fighting on both sides, the French finally managed to undermine and breach the outer wall. The English forces retreated into the massive castle keep built on the solid rock of the promontory. There was stalemate. Due to the solid rock, the French could not undermine the keep and were losing men to hunger and disease. They were also highly vulnerable to attack by the English fleet.

Finally, Sir William agreed terms with du Guesclin: If English fleet did not arrive in time, Sir William would surrender the castle in two months, at Michaelmas (ie. 29th September 1373). In the meantime, the French would withdraw.

The English fleet did arrive so the castle was saved. Several defenders were knighted for their valour.

By coincidence, du Guesclin was from near Dinan – like Sir William's wife's family!

The French raided again in 1374 and 1375 until the islanders agreed to pay them a ransom to stop hostilities.

Presumably Sir William used the first-hand knowledge gained during this time and during his earlier service in France to help plan Hemyock Castle.

In 1600, while Sir Walter Raleigh was Governor of Jersey with its new Elizabeth Castle, he resisted pressure to demolish the now dilapidated and obsolescent Mont Orgueil Castle.

However, Sir Walter was not so lucky. He later fell from favour and was sentenced to death, by Lord Chief Justice Sir John Popham – the owner of Hemyock Castle!

References in the Patent Rolls, Fine Rolls, Close Rolls and Inquisitions during the reign of King Edward III include:

1367, Feb 10, Westminster:
(William Austhorp deputizes for the keeper of the Channel Islands)
Writ de intendendo to the jurats, consuls, stewards, reeves, officers and other ministers and lieges of the islands of Jereseye, Gernereye, Serk and Aureneye, in favour of William de Austhorp and John Cok, appointed by Walter Huwet, to whom the king has committed the keeping of the said islands and the islands adjacent from 2 April next, and who is staying in Brittany about the expedition of certain of the king's affairs, to be his lieutenants during his absence, as the king's yeomen, Thomas Cheyne, general attorney of the said Walter, has testified before the king.

1373, April 20, Westminster:
(Sir William Asthorp appointed as keeper of the Channel Islands)
Commitment to William de Asthorp, chivaler of the keeping of the islands of Gernesey, Jereseye, Serk and Aurney, and the other isles adjacent thereto, and of the king's castle of Gurri in Jeresey and his castle Cornet and the tower Beauregard in Gernesey, to hold for 9 years from 1 May next, taking for such keeping all the profits, revenues and advantages thereof and therein which pertain to the king in respect of the farms of priories and other possessions of aliens and otherwise, provided that he reside there continually for the safe keeping and defence of the islands etc.,

faithfully keep the castles and tower at his peril and costs for the use of the king and his heirs, and bestow his best endeavours and diligence on safeguarding the islands, and provided that, if peace be made once more with the French before the end of 9 years, he pay yearly during such period of peace a farm of 300 marks at the Exchequer in equal portions at Michaelmas and Easter for the islands, profits, revenues and advantages aforesaid, (except only the farms of the priories, possessions and lands of aliens, which perchance will be restored to the said aliens by the terms of the peace),

and provided that he support all the charges of the said keeping, and of the castles and tower, without demanding or obtaining anything out of England from the king or his heirs for such keeping, and rule the people of the islands faithfully, and preserve the king's rights undiminished as far as possible, maintaining the castles and tower, as in walls, buildings, bridges, armour, artillery and all things pertaining thereto, well and properly, and leaving them in as good a state as he found them, or better;

as the king has learned for certain that Walter Huwet, to whom keeping of the said islands, and of the king's castles and fortresses there, was committed for life on 25 July, 40 Edward III, refuses to support the costs and charges of such keeping in this present time of war, or to stay personally on the safe-keeping of the islands, castles and fortresses, and purposes to go to other parts, whereupon the king by advice of the council has caused the islands etc. to be taken into his hand, and has committed them to William in order to avoid the perils which might arise by hostile attacks.
By K. and C.