Long before the advent of electronic communications, hilltop beacons were used to pass messages of impending danger or celebration. The UK had chains of established beacon sites used to pass the signal from hilltop to hilltop. In times of tension, beacon sites would have been kept prepared, fuelled, and manned.

Culmstock Beacon, on top of the Blackdown Hills near Hemyock is an ancient beacon site. The Beacon Hut built of the local Chert stone is a protected Ancient Monument.

On 3rd June 2002, as part of the celebrations for the Golden Jubilee of Queen Elizabeth II, there was a chain of about 2000 beacons, all around the world. One group lit a beacon on Mount Kenya. The many others included beacons near the North Pole, and in Antarctica.

The chain started overseas, in Commonwealth and other countries. It finished at 11:15 pm BST (10:15 pm GMT), when the Queen lit the National Beacon on the Queen Victoria Memorial in the Mall, near Buckingham Palace in London, initiating a spectacular fireworks and light show.

As part of the chain, the Culmstock Beacon was lit at 10 pm BST.

Before the lighting, the evening was clear and cool. More than 200 people climbed the rough tracks to the beacon site. Once alight, the beacon bonfire provided massive heat, illuminating the ancient chert stone beacon hut.

From this high point, other beacons could be seen all around, including Dunkery Beacon on Exmoor and others on Dartmoor - as well as the nearer ones such as Blackborough. Many also had fireworks, although perhaps the red, white and blue flashes actually meant that the French were invading!

On 26 February 1998, the "Countryside Alliance" lit a large bonfire alongside the ancient Culmstock Beacon, as part of their chain of beacons across the UK. 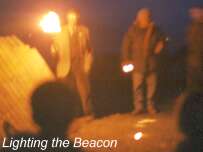 In spite of poor weather and bright modern street lights, similar bonfires were visible on other hilltops. 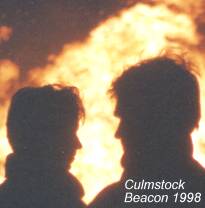